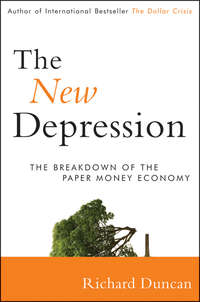 The New Depression. The Breakdown of the Paper Money Economy

Why the global recession is in danger of becoming another Great Depression, and how we can stop it When the United States stopped backing dollars with gold in 1968, the nature of money changed. All previous constraints on money and credit creation were removed and a new economic paradigm took shape. Economic growth ceased to be driven by capital accumulation and investment as it had been since before the Industrial Revolution. Instead, credit creation and consumption began to drive the economic dynamic. In The New Depression: The Breakdown of the Paper Money Economy, Richard Duncan introduces an analytical framework, The Quantity Theory of Credit, that explains all aspects of the calamity now unfolding: its causes, the rationale for the government's policy response to the crisis, what is likely to happen next, and how those developments will affect asset prices and investment portfolios. In his previous book, The Dollar Crisis (2003), Duncan explained why a severe global economic crisis was inevitable given the flaws in the post-Bretton Woods international monetary system, and now he's back to explain what's next. The economic system that emerged following the abandonment of sound money requires credit growth to survive. Yet the private sector can bear no additional debt and the government's creditworthiness is deteriorating rapidly. Should total credit begin to contract significantly, this New Depression will become a New Great Depression, with disastrous economic and geopolitical consequences. That outcome is not inevitable, and this book describes what must be done to prevent it. Presents a fascinating look inside the financial crisis and how the New Depression is poised to become a New Great Depression Introduces a new theoretical construct, The Quantity Theory of Credit, that is the key to understanding not only the developments that led to the crisis, but also to understanding how events will play out in the years ahead Offers unique insights from the man who predicted the global economic breakdown Alarming but essential reading, The New Depression explains why the global economy is teetering on the brink of falling into a deep and protracted depression, and how we can restore stability.