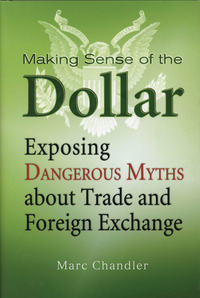 Making Sense of the Dollar. Exposing Dangerous Myths about Trade and Foreign Exchange

Has the greenback really lost its preeminent place in the world? Not according to currency expert Marc Chandler, who explains why so many are—wrongly—pessimistic about both the dollar and the U.S. economy. Making Sense of the Dollar explores the many factors—trade deficits, the dollar’s role in the world, globalization, capitalism, and more—that affect the dollar and the U.S. economy and lead to the inescapable conclusion that both are much stronger than many people suppose. Marc Chandler has been covering the global capital markets for twenty years as a foreign exchange strategist for several Wall Street firms. He is one of the most widely respected and quoted currency experts today.